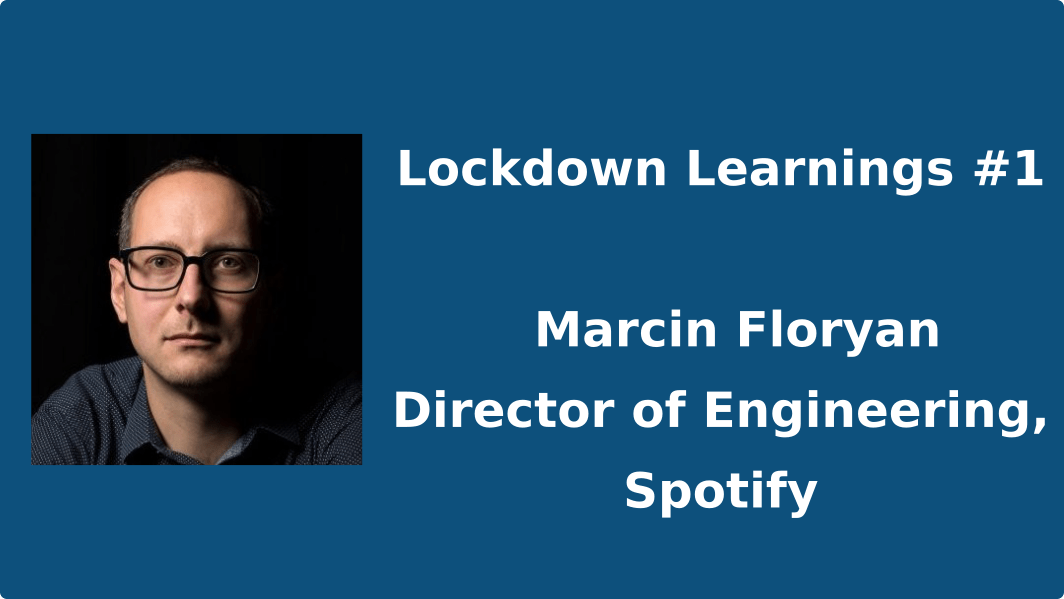 Question 1: Why did you get into tech?

I realised somewhere around 14 to 15 when I moved on from basic to writing like C and C++.  At the time my friend was running a veterinary clinic and running all the patient records on paper. He got himself a new computer and said “Okay, this is something I could use to help me run this thing?” And I went, “I don’t know, probably. But you’d need some software”. He’s all “Yeah, but I don’t have any software to do that”. Foolishly, I said “Well, maybe I could write something for you”. I mean, it was the most rudimentary, simplistic piece of software ever. But it allowed him to enter the history of visits and that was enough for him at the time, like no storage functionality, nothing sophisticated. But I think that was the first time that I realised that I could do something that is useful to other people.

Question 2: What is the biggest challenge facing you during lockdown?

Being able to get the information that isn’t, through official, structured channels, but just finding things out almost by accident, through just interacting with people. And that’s both, you know, on what’s going on, but also how people are doing.

Question 3: What are you learning about yourself?

I’m certainly learning how much I crave that contact with other people, you know how huge a gap that leaves. When you’re in the office, you always tend to think, “Oh, if only I have a moment to myself, if I could go into a room and focus”. You know, sometimes you put some stuff in your calendar just to get yourself to do this. There are a lot of these distractions in the office, and I’m learning that these distractions are actually how I do my job, so that that’s been a super interesting discovery that in all those little moments of conversations, asking questions here and there, giving people small challenges, suggestions … that’s how a lot of the work that I do ends up getting done.

Question 4: What are the key attributes of a successful Tech Leader?

It’s super tempting to say that, it needs to be charisma and vision, clear setting off goals and direction. But I actually don’t believe that anymore. I think that the characteristics of a really successful technical leader, are authenticity, humanity and empathy. And I think there are, like, three abilities that people really have to be able to display, to be able to become a leader that people in today’s world are willing to look up to or follow or engage with and for me that’s the ability to admit mistakes, to admit that you don’t know something and following that, to be able to ask for help from other people around you.

Question 5: How do you make your toughest decisions?

I think of a decision that is really tough, again it’s tempting to say, something like: you get a lot of information and you try to weigh different pros and cons. But much more often than not, especially these days, I will actually lean on other people and get input from a network of trusted advisers, you know, not just going out broadly and asking everyone else “What do you think I should do here?”. But really getting those few people who I know are experienced and knowledgeable in those domains and say, you know, here is the decision. “What would you suggest?” and then using all that knowledge to build out a good picture of where to go.

How are we gonna use the experience of this lock down period going forward? Are we able to actually learn something from what has happened around how we communicate, how we share information, how we plan together, how we interact? Maybe there are some processes that we could tweak here and there, that weren’t obviously broken before but can be improved. So I think that the challenges really to use that opportunity that we had of learning about the world around us.

Question 7: What’s the best work related decision you ever made?

It would have to be that the decision to apply for the role that I currently have. It was interesting because it wasn’t a straightforward decision because this was going from a different role to the current role in the same organisation, so not going externally. At the time, there were very few people in the organisation who have made a similar transition and most of the advice that I was getting at the time was “don’t you know it’s a very hard job” very different from what you’ve been doing before, so be very careful. Be ready to fail here. Be ready to be completely disappointed with your own performance because many people don’t get it and somehow, I decided to try this anyway and somehow succeeded. That was the best decision because I feel today it has given me the opportunity to have a bigger impact on the organisation and find a more fulfilling job.

Question 8: And the worst?

Those worst decisions fall into two categories. One category would definitely be around, not giving someone feedback. So, you know, finding things that are not going well either in terms of how the organisation is performing or how something’s going, or in terms of someone’s personal, either behaviours or actions and you know, seeing something that is obviously wrong, at least in my mind and not sharing that information back with people, not telling them “Look, I think this is not gonna work out well”, or you know, “I’m seeing it like this from my perspective. What do you think?” So these are the situations where I really think actually acting would have been much more effective. Then I think the other category is maybe in a similar vein, is, you know, not maybe leaning into some of the conversations and decisions at the right time. I think when I reflected about that category most of these things end up turning out well and sometimes maybe just know as quickly as they could have.

Question 9: What’s the best piece of career advice you ever received?

Really understand, what am I about? Like, what do I really truly care about for myself? So ultimately, what is my set of values that would allow me to be successful in my career? Then the other piece of advice is to look out for the opportunity to work with great people that you really want to put yourself in an environment where there’s a lot of smart people around you and, ideally way smarter than you are, because that’s where you’re gonna learn the most.

Question 10: What questions would you like answered by other senior tech leaders ?

Question 11: What’s the first thing you plan to do after the lockdown?

It feels like it’s gonna be a huge party and I’m pretty sure I’m going to go and hug a few colleagues that I haven’t been in touch with. Really getting back into those more direct interactions and making the most of being able to be around more people again.

The Human Side Of Enterprise by Douglas McGregor

Thank you to Marcin and all our wonderful guests.
Full length version of this and all other interviews is available to “Existing Members”.
If you’d like to join CTO Academy and get access to these interviews, our management skills courses and more, sign up via “New Members”.